Life got a bit crazy there for a while, but I’m finally getting around to replying to some posts I was nominated in.

The Five Flaming Hotties Tag, is one of the more entertaining tags I’ve come across. Which is why I was thrilled to be tagged twice. So, before I going any further I’d like to thank those that tagged me.

Raistlin0903 Thank you for the tag. Your blog is awesome. I would highly recommend everyone check his reviews out. They’re very entertaining and Raistlin0903 himself is one of the friendliest people you’ll come across on WordPress.

Rodrovich Thank you also for the tag. I love your blog. If you’re into anime, I would also highly recommend checking out Rodrovich blog. They’ve got a lot of interesting and cool stuff over there.

I’m just going to jump right into this list and hopefully not sound like a complete sleaze ball. I’ve decided to pick five anime hotties, because personally I think these lists are so much more fun, when anime is involved. But, let’s just face it, anime guys are designed to be unbelievably beautiful. So, to really win a gal over, I feel the character has to have heart and a personality as well. Being kind and cuddly are very attractive qualities in my book at least.

So, without further rambling, I give to you my Five Flaming Hotties:

Ban Fox Sin of Greed (7 Deadly Sin)- This is an obvious one. I’ve expressed my fondness of the character Ban, so many times. It would be safe to assume, he would make it onto this list. Being the sin of greed, you would expect him to be selfish and of course greedy. But weirdly he’s the complete opposite. He even try to sacrifice himself and his dream of being immortal and forever young, to save the woman he loved.
The picture I chose, sums up Ban’s personality very well and it’s this scene (Ban and Meliodas reunion), that made me develop a huge soft spot for this character. He’s like an excitable puppy most of the time and shows real passion. But in addition to this, he also has a very deep serious side, hidden under that beautiful smile. He is kind of silly at times (like not understanding how clothes works), but I like that side of him. Also he’s an excellent cook.

Uta (Tokyo Ghoul)- Glob, I love Uta’s tattoos and piercings. I have my ear cartilage pierced several times, so I especially love his ear piercings. But enough with the creepy piercing comparing and back to the list.
What I like about Uta, is his sense of humour and relaxed demeanour. That whole hiding under a sheet thing, is something stupid I do for a laugh. It’s childish I know, but it’s the kind of silly cheesy thing I’d find hilarious. Uta also seems so comfortable with himself and very relaxed most of time. Qualities I would love to have myself, but sadly don’t. He does give of a dark dangerous aura, but he is a man-eating ghoul after all, so that’s not surprising. 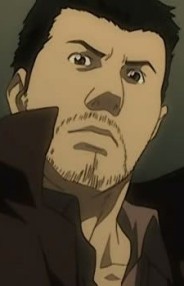 Shuichi Aizawa (Death Note)- An extremely underrated character, but that doesn’t detract from the fact he’s a cutie. Apart for looking adorable, Shuichi Aizawa has a lot of balls (heads out of the gutter, not those sort a balls). Time and time again, he shows an immense bravery and puts his life on the line, for what he believes is the greater good.
He’s also no idiot. He seen through Light’s falsities and smelled a rat. He knew something was not quite right with Light and risked death, to follow his gut feeling to discover the true nature of Light Yagami. That was some impressive interpersonal intelligences, if you ask me.

Levi (Attack on Titan)- All those short person jokes and I’m still considerably shorter than Levi. On the bright side, being able to look a guy in the eyes would be nice. All that looking up, really strains the neck and at least if I hugged a guy Levi’s height, I wouldn’t get a face full of man boob (it’s so awkward).
Other than being perfectly sized, Levi is pretty kick ass and very strong-willed. He does seem grumpy and cold, but in my opinion, that’s probably a defence mechanism. There’s just been times, he has shown real heart and genuinely cold people don’t do that. Deep down Levi is actually kind-hearted. Something I always look for in people. (Visually, I find it hard to tell the difference between Levi and Eren) 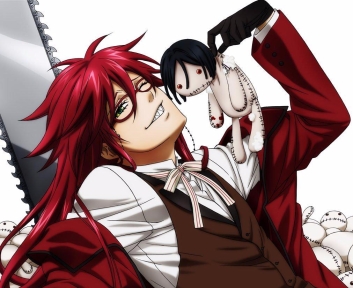 Grell (Black Butler)- I thought I’d end this list with a fiery red hair. Grell is probably one of my more unusual anime crushes. I just love Grell’s way of going on and the fact he doesn’t take things too serious. Grell might be the ultimate stalker fan girl sort, but Glob is he passionate. He seems to never be afraid of expressing his emotions. Something I like a lot.
Although, he is a bit of a psychopath with that chainsaw, he’s also rather sweet and funny. I just love Grell’s playful nature and cheerfulness. Some may find it rather annoying but for me, Grell’s antics always bring a little smile to my face.

ne’ senpai (a spoil from nesha.)

If I’ve tagged you, don’t feel any pressure to do this tag. I completely understand, if you don’t do tags.

Now, if you would excuse me. I’ve a bit of a nosebleed to attend to.