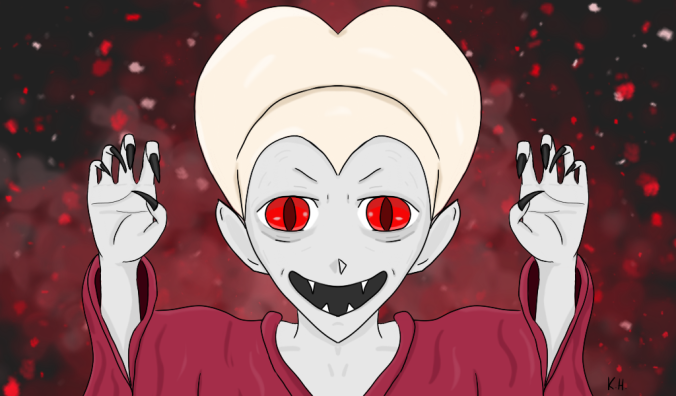 Vampires have always been something I liked from the horror genre. There’s just something about a monster that’s incredibly charming and looks human but can potentially suck you dry of your blood in an instant, that’s makes my skin crawl. So, for this review I thought I’d go back to the classics and share with you me thoughts on a movie about the Daddy of vampires himself, Count Dracula.

As you’ve probably guessed this film is closely based on the Bram Stoker novel Dracula. If you’re not familiar with the story, don’t worry I’ll fill you in. A young lawyer Jonathan leaves his fiancée Mina in London, to travels to Dracula’s castle to do a spot of business with the Count himself. When Jonathan arrives at the castle, Count Dracula tricks him into staying. However, Jonathan soon realises he’s being held against his will, when he tries to leave. Dracula then decides to travel to London, leaving poor Jonathan to be fed on by his lady vampires.

Once at London, the Count starts feeding on Mina’s friend Lucy, all while trying to win Mina favour. Eventually Jonathan escapes from Dracula’s castle and the vampire ladies and makes it back to London. However unfortunately, Lucy dies and becomes a vampire. Now faced with numerous vampires, a man known as Van Helsing steps in to lead the hunt for Dracula and his band of lady vampires.

Yeah, there’s a lot that goes on in Dracula, but is the film any good? All I can say is, it won’t be for anyone. Like the book it can be a little heavy and strange at times, which may put off some viewers. But if you love the book, I could see you thoroughly enjoying this film. It very closely follows the book, only leaving out a few details and even tries to maintain the letter/journal feel of the book. The only thing is, I don’t remember the book containing as much toplessness as this film. But I guess it depends on your own opinion, whether that’s a good or a bad thing.

The portrayal of Dracula himself is pretty good in this film. He starts off looking creepy as hell, sporting the famous Butt shaped hairdo, and gives of some real psychotic vibes. He then transitions into an extremely charming and attractive man, but still gives off a bit of a creepy vibe and by the end of the movie, he loses his charm and become a super gross batman creature. That’s pretty true to the book. However, unlike the book, the film doesn’t explain why Dracula’s appearance changes, very well and pretty much takes for granted that the viewer would know the reason for this. On a more positive note, the Film’s Dracula was a lot less ranty than the book’s and doesn’t go off on a tangent as much.

I must admit that the special effects in this film are a bit dated. However, they still look kind of cool, especially the play with Dracula’s shadows. The pacing also seems a little strange, feeling slow and heavy at times and kind of rushed at other times. But considering how long the book is, you can forgive the pacing.

Overall, Bram Stoker’s Dracula is an okay film. It does have its problems, but as book adaptations go, it’s pretty good. Sticking very close to the source material and leaving out only a few details (most likely for time-saving purposes). The film may now seem a little dated now, but if you’re a lover of the book or Dracula himself, you will most likely enjoy this film. Leaving me to recommend it, to anyone mad about vampires.